#Thelooktodiefor with the NHS & Liverpool Council 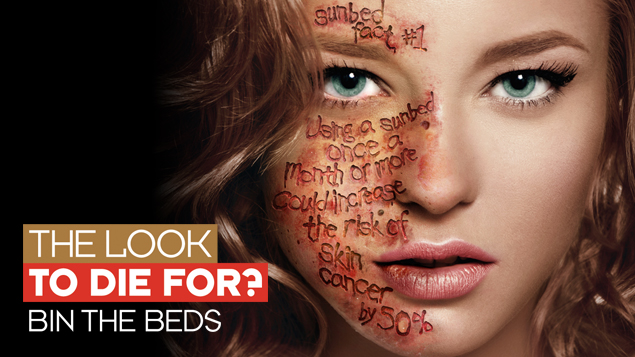 We were recently commissioned by Liverpool City Council and the NHS to launch a bold new campaign against sunbed use in Liverpool. The campaign is also supported by Cancer Research UK and top self-tan brand St Moriz.

The launch of our ‘The Look To Die For?’ campaign has been a huge success, garnering lots of attention and stimulating a national debate. You may have seen the campaign in the newspapers or on TV this past week, as it has been picked up by a large number of national and regional press, notably appearing on BBC Breakfast and North West Tonight.

The target of this campaign is the young people of Liverpool, predominantly young girls who are particularly at risk from the sunbed use, and their parents/guardians. Sunbeds are a huge problem in Liverpool, with 50% of girls aged 15 – 17 years old in the city having used a sunbed – much higher than the national average of just 11%.

This is where ‘The Look To Die For?’ comes in; our new campaign will raise awareness surrounding the very real dangers of sunbed use and help change public perception of sunbeds by encouraging the people of Liverpool to bin the beds.

The creative for this campaign uses beautiful, aspirational photography of attractive models and juxtaposes this with hard-hitting imagery that reveals the skin damage, scarring and types of skin cancer that can be caused by using the sunbed.

We’ve literally etched the disturbing facts about the risks of sunbeds and cancer onto each model’s face to show the devastating consequences that can come with using a sunbed.

The aspirational beauty shots in the campaign attract the attention of our audience and the shocking depiction of cancer will make them think twice before they needlessly put themselves at risk by using a sunbed. The contrast between the two elements creates a really striking series of images that will strike a chord with the young people of Liverpool.

We were commissioned to produce a variety of material for this multi-channel campaign that includes and isn’t exhaustive of a campaign website, posters, PR and social media support, leaflets, YouTube videos, mini magazines and more – plus over the next year the campaign will be going in to schools to talk directly to young boys and girls, as well as hosting lots of events across the city of Liverpool.

This campaign has the potential to save lives and protect thousands of young people from needless pain and suffering, and that’s something we’re proud of. We’re right behind Liverpool City Council in the fight against sunbeds and we hope you are too.

If you’d like to take action yourself you can sign the petition to get the Government to grant local authorities in England the power to license and regulate sunbed businesses by clicking here.

To see more of the campaign visit our work page here.

To read some of the coverage click on the links below:
BBC News  |  ITV News |  Liverpool Echo |  The Guardian  | Juice FM